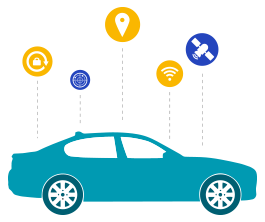 As all modes of transport are increasingly reliant on technology to improve their efficiency, flexibility and cost, there is an increase in the associated data protection concerns, such as tracking and international data transfers which need to be closely monitored.

Simplifying the transfer of motor vehicles registered in another Member State

Driving licences including functionalities of a driver card

The European Data Protection Supervisor (EDPS) issued today an opinion on a Commission proposal to merge the driving licence of professional drivers with their driver card. The integration of two totally different functionalities in one single card, which would record a wide range of data about professional drivers including their activities and whereabouts, would have a significant impact on the fundamental right to the protection of personal data.

Opinion on the proposal for a Regulation of the European Parliament and of the Council concerning customs enforcement of intellectual property rights, OJ C 363/01, 13.12.2011, p1

The European Data Protection Supervisor (EDPS) adopted an opinion yesterday on the European Commission proposal to revise the EU legislation on tachographs - the device used in road transport to monitor driving times and rest periods of professional drivers - as a means of checking compliance with social legislation in the field*.

Use of Security Scanners at EU airports

Communication from the Commission to the European Parliament and the Council on the Use of Security Scanners at EU airports, 15 June 2010

Accidents and incidents in civil aviation

Today, the European Data Protection Supervisor (EDPS) adopted an opinion on the European Commission's proposed deployment plan for intelligent transport systems (ITS) in Europe that was adopted in December 2008 to accelerate and coordinate their deployment in road transport and their connection with other modes of transport (*).

The EDPS has adopted an opinion on the European Commission's proposed deployment plan for intelligent transport systems (ITS) in Europe that was adopted in December 2008 to accelerate and coordinate their deployment in road transport and their connection with other modes of transport. The deployment of ITS  has considerable privacy implications, for instance because these systems make it possible to track a vehicle and to collect a wide variety of data relating to European road users' driving habits.

The EDPS notes that data protection has been taken into consideration in the proposed legal framework and that it is also put forward as a general condition for the proper deployment of ITS. He however underlines that the Commission's proposal is too broad and too general to adequately address the privacy and data protection concerns raised by ITS deployment in the Member States. In particular, it is not clear when the performance of ITS services will lead to the collection and processing of personal data, what are the purposes and modalities for which data processing may take place, or who will be responsible for compliance with data protection obligations.

Background information
ITS apply information and communication technologies (satellite, computer, telephone, etc.) to transport infrastructure and vehicles with the intention to make transport safer and cleaner and to reduce traffic congestion. ITS applications and services are based on the collection, processing and exchange of a wide variety of data, both from public and private sources, including information on traffic and accidents but also personal data, such as the driving habits and journey patterns of citizens. Their deployment will also rely to a large extent on the use of geolocalisation technologies, such as satellite-positioning and RFID tags. As such, ITS constitute a "data-intensive area" and raise a number of privacy and data protection issues that should be carefully addressed in order to ensure the workability of ITS across Europe.

Opinion on the proposal for a Council Directive imposing an obligation on Member States to maintain minimum stocks of crude oil and/or petroleum products, OJ C 128, 06.06.2009, p. 42