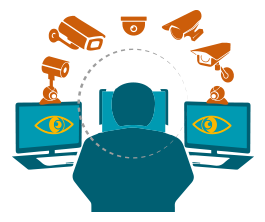 Technological progress in the last few decades have made monitoring, tracking and profiling techniques easier, cheaper and more accurate. As a result, surveillance has increased in both the public sector (for law enforcement purposes and public security for example) and in the private sector (for targeted advertising for example). These practices can profoundly affect how individuals think and act, as well as other personal rights (such as freedom of expression or association). Any form of surveillance is an intrusion on the fundamental rights to the protection of personal data and to the right to privacy.  It must be provided for by law and be necessary and proportionate.

Deployment of the eCall System

Warsaw declaration on the “appification” of society

Resolution on digital education for all

Video-surveillance: Helping EU institutions and bodies to get the message across

Today, the European Data Protection Supervisor (EDPS) issued his report on the findings of some on-the-spot inspections conducted between 15 June and 18 July 2012 on the premises of thirteen Brussels-based EU institutions and bodies.

EDPS comments on DG Connect's public consultation on specific aspects of transparency, traffic management and switching in an open internet

Recording of the telephone line

Recording of the telephone line - EC

Opinion of 24 May 2012 on the notification for prior checking concerning the ‘Recording of the telephone line used for security guard service reports and calls concerning actions connected with the system for controlling access to Commission buildings (Brussels)’, European Commission (Case 2011-0987)

Opinion of 15 May 2012 on the notification for prior checking concerning the case ‘Register of telephone calls (mobile telephony)’, European Investment Bank (Case 2009-0704)

Opinion on the proposal for a Council Decision on the Conclusion of the Anti-Counterfeiting Trade Agreement between the European Union and its Member States, Australia, Canada, Japan, the Republic of Korea, the United Mexican States, the Kingdom of Morocco, New Zealand, the Republic of Singapore, the Swiss Confederation and the United States of America

Executive summary of the EDPS Opinion

Review of the Professional Qualifications Directive

Opinion on the Commission proposal for a Directive of the European Parliament and of the Council amending Directive 2005/36/EC on the recognition of professional qualifications and Regulation [...] on administrative cooperation through the Internal Market Information System, OJ C 137/01 12.05.2012, p1

See also the text of the proposal for a Directive of the European Parliament and of the Council amending the Directive 2005/36/EC on the recognition of professional qualifications and Regulation [...] on administrative cooperation through the Internal Market Information System

The objective of the Proposal is to modernize and amend the existing text of Directive 2005/36/EC (the Professional Qualifications Directive). From the data protection perspective, the two key aspects of the Proposal are (i) the introduction of an alert system and (ii) the introduction on a voluntary basis of a European Professional Card . The processing of personal data in both cases is foreseen to take place via the Internal Market Information System (IMI).

The EDPS welcomes the efforts made in the Proposal to address data protection concerns. The EDPS also welcomes the fact that the use of an existing information system, IMI, is proposed for the administrative cooperation, which already offers, at the practical level, a number of data protection safeguards. Nevertheless, important concerns remain, mainly relating to the alert system, which must remain proportionate.

The EDPS recommends, in particular, that:

With regard to the European Professional Card and the related ‘IMI-file’, the EDPS recommends further clarifications on the conditions under which information concerning disciplinary action or criminal sanctions or any other serious specific circumstances must be included in the file, and the content of the information to be included, and also recommends clear limitation on the retention periods.

Further, the EDPS recommends that in the long term, if and when the use of Professional Cards and IMI will become widespread, the Commission undertake a review of whether the Article 56a alert systems are still necessary and whether they cannot be replaced by a more limited, and thus, from the data protection point of view, less intrusive, system.